Authored by RSM US LLP

The legislative cycle for federal tax policy is a function of political will, competing agendas, and deadlines, both informal and actual. Like many policy matters, it is often unpredictable. So how can you gain clarity amid that uncertainty?

RSM’s understanding of the cycle stems from our experience navigating key dynamics and our engagement with various policy stakeholders on Capitol Hill. Our policy team, which includes professionals with experience serving the IRS and Department of the Treasury, translates legislative developments and gauges the political winds so you can clearly understand how your organization is affected.

This annual timeline highlights milestones in the legislative cycle as they come into view. Find out more details about the latest state of play for each season, or skip ahead to learn what’s happening now.

Start of the fiscal year for the federal government 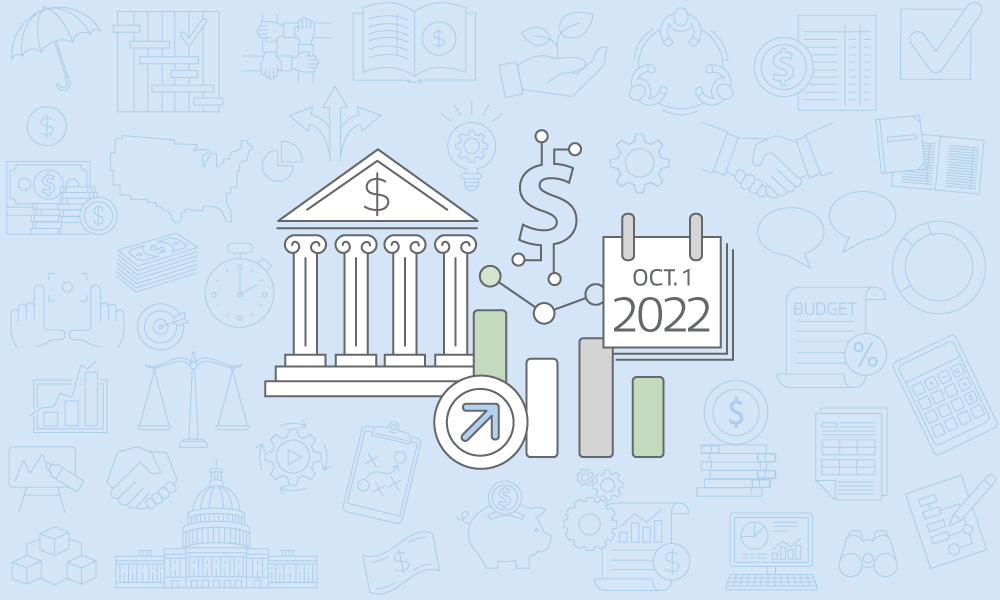 Legislative deadlines precede the start of the federal government’s fiscal year at the end of the previous year. It is common for appropriations to expire on Sept. 30 and for Congress to require a continuing resolution to remain operational.

With the tax changes in the Inflation Reduction Act signed into law on Aug. 16, Congress returned to session in early September with a packed agenda led by priorities anchored outside of the tax world.

As lawmakers negotiate a continuing resolution, they will take note of their colleagues’ priorities, which could help shape a possible extender package by the end of the calendar year.

Taxes and the Inflation Reduction Act: What businesses should know > 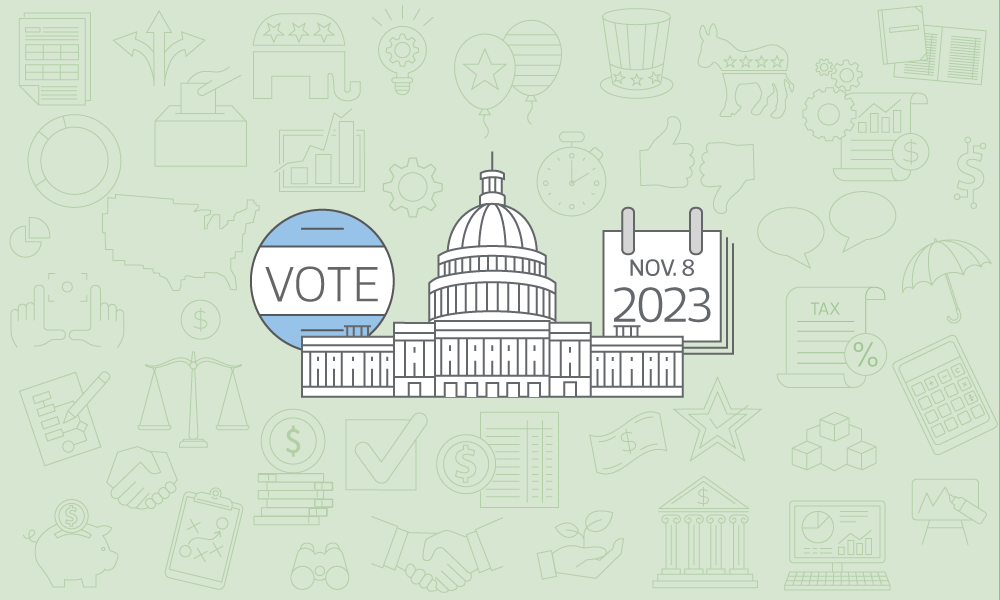 Election Day in the United States occurs annually on Tuesday following the first Monday in November. Elections to the U.S. House of Representatives are held biennially in even-numbered years. Elections to the Senate occur at the same frequency, but, unlike in the House, only approximately one-third of seats are contested biennially. The next presidential election is in 2024.

If Republicans win control of either the House or Senate, dynamics of a divided government will shape Capitol Hill discourse about tax policy, and it would all but extinguish the possibility of significant federal tax law changes for at least the next two years.

The administration could then turn to regulations to shape tax policy. It is unclear what issues the administration would attempt to address or if it would take this approach at all. However, the administration laid out its priorities in late May in the so-called Green Book, published by the Treasury Department. One area worth closely following is wealth transfer methods.

If Democrats retain their majorities, they could reassess and pursue their priorities for the next two years. 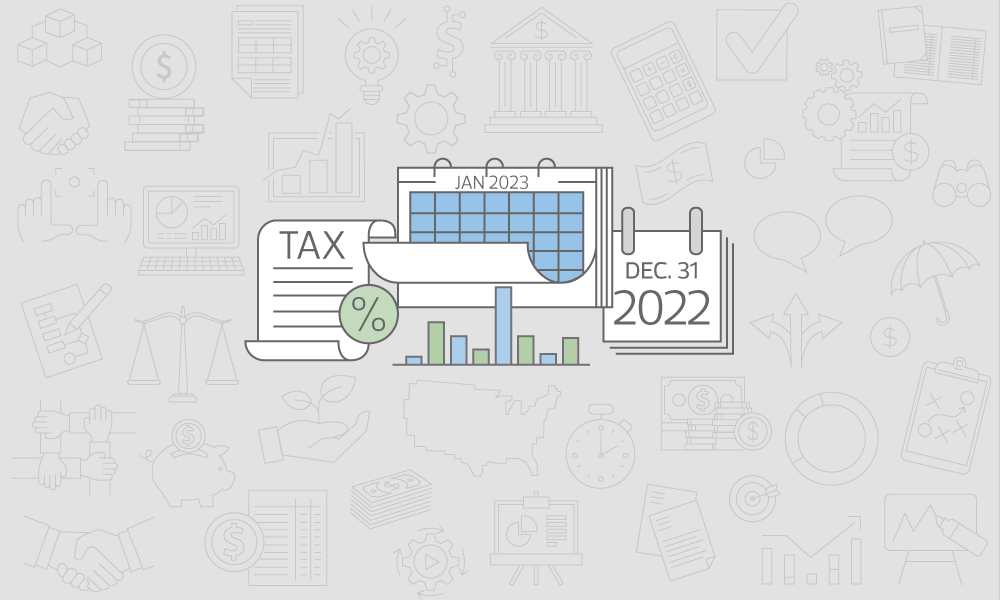 It is common for tax law provisions to expire on the final day of the calendar year. This threat of expiration can compel lawmakers—sometimes in a lame-duck session following the recent general election—to postpone expiration by passing so-called extender bills. Also, in an election year, an impending shift in congressional majorities could either drive legislative activity or delay it, depending on the political dynamics.

Republicans’ win of a narrow majority in the House of Representatives represents a shift in the balance of power for the 118th Congress beginning in 2023. Before then, both parties’ eagerness to clear their to-do lists and get organized could increase the likelihood of year-end tax legislation.

Three tax issues stand out among those that could be addressed in a year-end bill in 2022: the tax treatment of research and development expenses (section 174), the deductibility of business interest expenses (section 163(j)) and regulations governing bonus depreciation of qualified property. 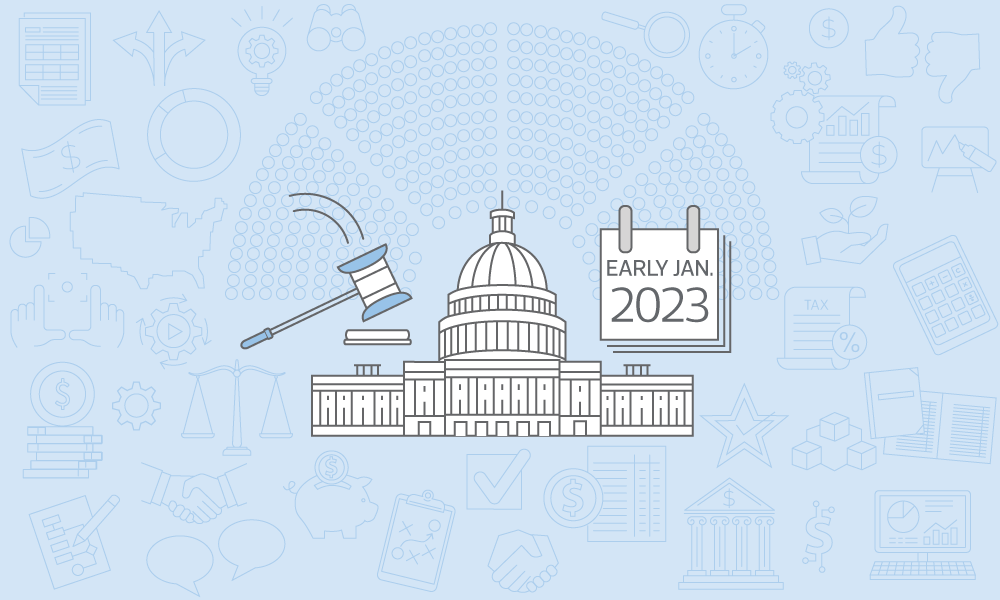 Congress sits for a two-year term comprised of two sessions that begin each year on Jan. 3 or shortly thereafter. New members who were elected in November take office.

Divided government will take hold when the 118th Congress is seated on Jan. 3. The narrow Democratic majority in the Senate and slim Republican edge in the House of Representatives combine for a political dynamic in which significant tax legislation is improbable for the next two years. Regulation could factor heavily instead of legislation.

Congress certainly could address any unresolved tax issues from 2022, but any big headlines are more likely to revolve around messaging bills with dubious viability. Any substantial tax policy negotiations could feature the Democratic priority of the expanded child tax credit and the Republican objective of making permanent some provisions in the Tax Cuts and Jobs Act.

State of the Union address 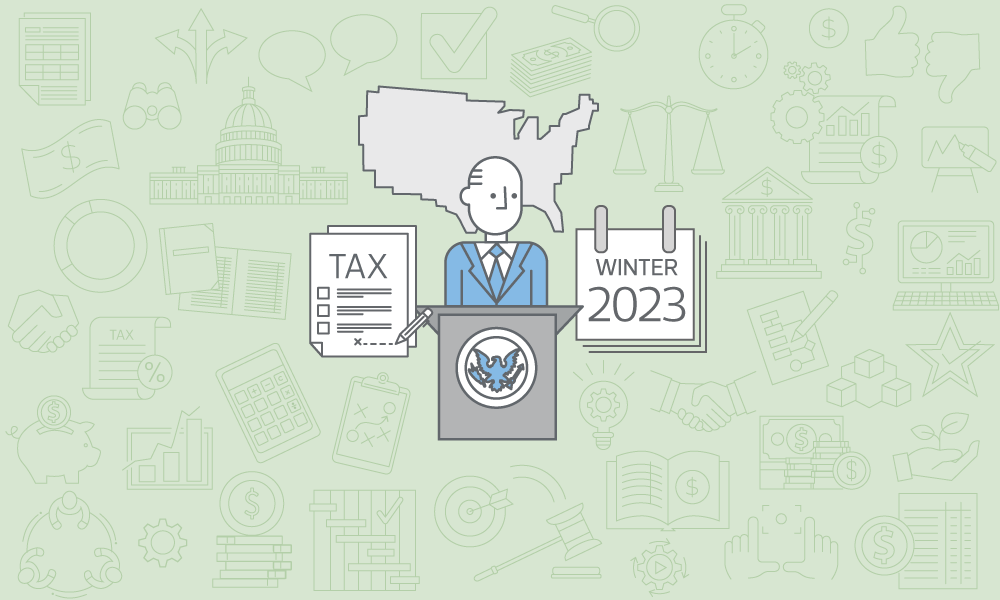 The president traditionally addresses a joint session of Congress sometime during the first three months of each calendar year. In discussing the state of the nation, the president often reveals priorities that implicitly or explicitly have tax ramifications, setting the course for lawmakers’ tax policy discussions. 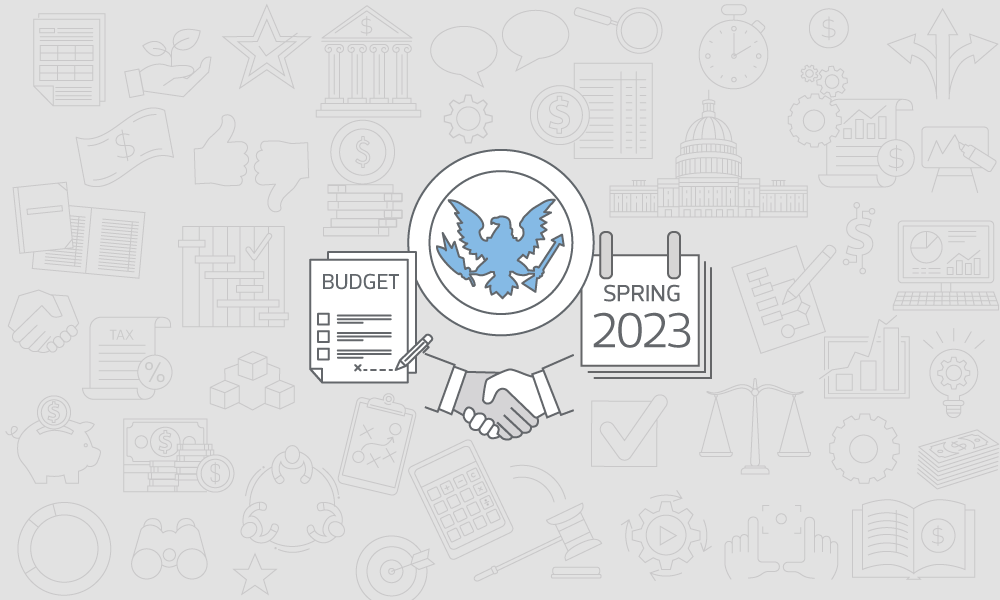 Each spring, the president usually publishes a budget request for the upcoming fiscal year and supplements it with explanations of the revenue proposals. The explanations are published by the U.S. Treasury in the so-called Green Book. The budget request is not legislation but serves as a guidepost for lawmakers’ tax policy discussions. 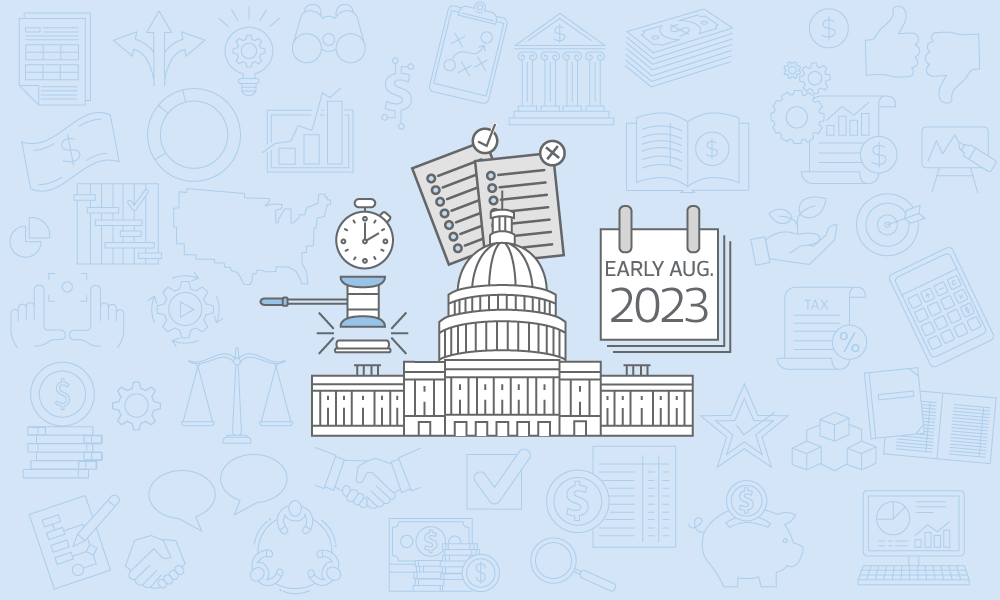 Both chambers recess annually from August through Labor Day. When Congress reconvenes, previous unfinished business commonly slips into jeopardy because the attention typically turns to the upcoming budget deadline and general election.

End of the fiscal year for the federal government 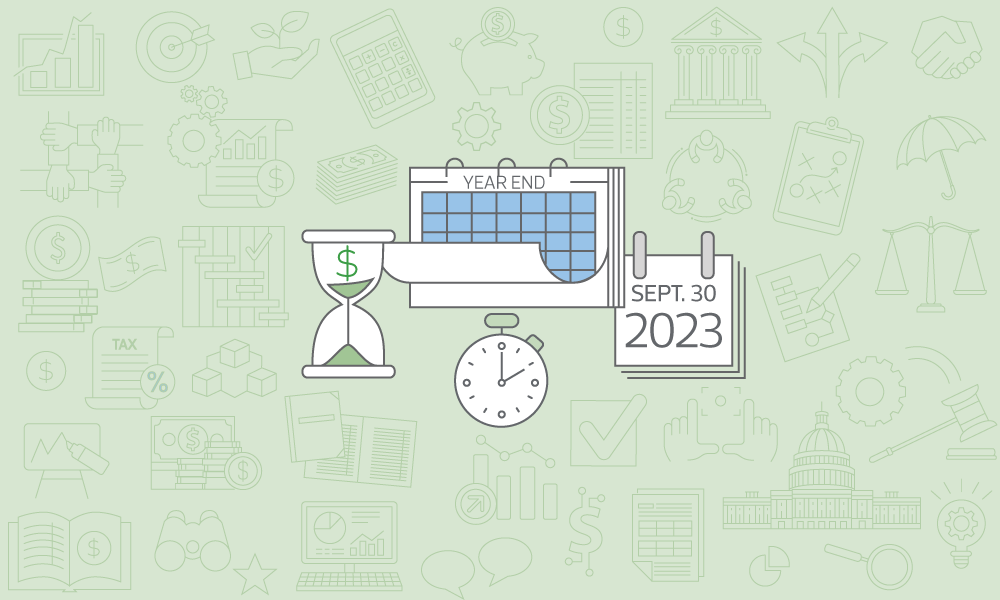 The last day of the federal government’s fiscal year includes legislative deadlines. It is also common for appropriations to expire on this day.

This article was written by RSM US LLP and originally appeared on 2022-11-17.
2022 RSM US LLP. All rights reserved.
https://rsmus.com/insights/services/business-tax/the-annual-tax-policy-cycle-and-current-state-of-play.html

The information contained herein is general in nature and based on authorities that are subject to change. RSM US LLP guarantees neither the accuracy nor completeness of any information and is not responsible for any errors or omissions, or for results obtained by others as a result of reliance upon such information. RSM US LLP assumes no obligation to inform the reader of any changes in tax laws or other factors that could affect information contained herein. This publication does not, and is not intended to, provide legal, tax or accounting advice, and readers should consult their tax advisors concerning the application of tax laws to their particular situations. This analysis is not tax advice and is not intended or written to be used, and cannot be used, for purposes of avoiding tax penalties that may be imposed on any taxpayer.

LGA, LLP is a proud member of RSM US Alliance, a premier affiliation of independent accounting and consulting firms in the United States. RSM US Alliance provides our firm with access to resources of RSM US LLP, the leading provider of audit, tax and consulting services focused on the middle market. RSM US LLP is a licensed CPA firm and the U.S. member of RSM International, a global network of independent audit, tax and consulting firms with more than 43,000 people in over 120 countries.

Our membership in RSM US Alliance has elevated our capabilities in the marketplace, helping to differentiate our firm from the competition while allowing us to maintain our independence and entrepreneurial culture. We have access to a valuable peer network of like-sized firms as well as a broad range of tools, expertise, and technical resources.